A British cool guitarist Mark Gemini Thwaite (MGT) is realising a new album which is called «Volumes» very soon. And not long ago a worldwide premiere of a single and a video «Knowing me knowing you» took place. This is a cover on a famous ABBA’s song, which was recorded with a famous Finnish rock-star Ville Valo. It’s hard to believe but the video was view over 100000 people in the first hours! Fantastic? Yes, of course! But there’s another one explanation for such a success: you should always do your job with love, with soul and with all your heart! Together with your true friends! And then the result will exceed all expectations! That is exactly what happened with Mark Gemini Thwaite.

Specially for Eatmusic Mark answered the questions about his solo album, his work on the single «Knowing Me Knowing You», shooting the video and even presents his own short hit-parade for the readers.

ЕМ: Hello, Mark! Thank you for answering our questions. And receive our congratulations with so successful realise of the single and the video.

ЕМ: Why have you decided to become a musician and a guitar player namely but not a singer? In your childhood you might had an example to follow, didn’t you?

MGT: Well I got my first guitar when I was 15, after my best friend Paddy had already gotten a Les Paul copy. I decided it was really cool and I wanted one too. He was always 3 months ahead of me in ability so I was constantly trying to catch up to him. I stuck with it and he didn’t! As for singing, well I’ve never aspired to be a singer. I tried as a teenager in local bands to sing on a few songs but just didn’t like the sound of my voice. I felt more comfortable being the guitarist only and making that my world! I saw myself as the Jimmy Page of each band I was in, contributing riffs and music but always leaving the vocals to a ‘proper’ singer, like Ville Valo or Peter Murphy and the other singers I have toured with over the years.

EM: From your point of view who is the best contemporary guitar player?

MGT: As for who is the best contemporary guitar player, I guess that’s a hard one to ask, hard to name just one guy. There are so many awesome players out there and its not always about technical ability either, its as much about the feel… What notes you don’t play are more important than the ones you do play…

EM: Why does your first solo album call Volumes? Have you decided to name it so by your own or somebody has helped with the idea?

MGT: Actually I have one song on the album with Julianne Regan of UK band All About Eve on vocals, a wonderful song, she recorded some beautiful vocals and when I asked her what the song was to be called – I always let the vocalist name the song as they are writing the lyrics, I write all the music – she said she was considering «Star Struck Eyes» or «Volumes» – both mentioned in the choruses of the song. I suggested we go with «Star Struck Eyes» as we have an amazing saxophone solo on the end of the song by Jorgen Munkeby of Norweigan jazz metal band SHINING, and it was evocative of Bowie and Roxy Music. So I felt «Star Struck Eyes» sounded like a Bryan Ferry/Roxy style song title. But I remembered the «Volumes» suggestion and asked Julianne if I could use that as the album title, as not only is it a reference to a collection of books or a body of work, but also has that musical reference with the word «Volume».

ЕМ: Imagine that you advertise your album how would you describe it with several interesting words that the readers could grasp what is it like?

ЕМ: What difficulties did you face working on your first solo album and what was simple and fun?

MGT: It was a surprisingly chilled and stress free album to record, as unlike most of the other 20 or so albums I’ve recorded on in various professional studios around the world and various bands and singers who make the decisions. I recorded all of my album in the comfort of my home studio, I got to decide what was used and what wasn’t, I was my own producer, and I even controlled the mixes once I had the vocals down (except for «Knowing Me Knowing You» where I agreed with Ville to get Tim Palmer to mix that one). No one was breathing over my shoulder while I recorded and experimented and I got to make all the executive decisions… very liberating.

ЕМ: The first your and Ville Valo’s single «Knowing me knowing you» has been already released. Can you say that it’s the best from the whole album? Do you have your own more and less favorite songs like the listeners have or all your songs are equally important for you?

MGT: Well this is my first ‘solo’ album and its hard to say which ones are my favorites, as the songs are like my children, you can’t just pick one! But I would say my cover of «Knowing Me Knowing You» is a real highlight of the album, I’d had it in my mind to record a dark and heavy version of it for years, and Ville and I had talked of collaborating for many years so we finally got to do it!

EM: Do you worry about remastering songs of the great singers such ABBA? After all many people think that the original always stays the best and all remakes are just its shadows.

MGT: It was a challenge to record the song and make it our own. In my mind ABBA are masters of pop rock songwriting and rather than completely change the song on my version, I chose to show respect for the original and keep most of what made that original version so good. I learned every chord change and bass line and lead guitar part from the original and then recorded each part with reverence to the original but injecting my own flavour into it.

ЕМ:  Not long ago your new video with Ville Valo on the song «Knowing me knowing you» was released. Tell us a little bit about the video making off.

MGT: My manager and PR girl Silke Yli Sirnio suggested Finnish director Ville Juurikkala for the shoot, I checked out some of his videos with The 69 Eyes and Santa Cruz and was impressed and after we suggested a winter theme for the video. Ville came onboard and did a fantastic job, taking us up into the California snow covered mountains to shoot my footage and then Ville’s close-ups back in their hometown of Helsinki Finland.. Very pleased with it!

ЕМ: The idea to shoot the video, did it appear with the decision to record a song or you decided it later according to the single popularity?

MGT: Ville Valo suggested we try and shoot a video once we had the song recorded and mixed by Tim Palmer in September 2015, I think Ville realized it had tremendous potential. So once label SPV agreed to fund the video, we then found out that apparently ABBA have to approve any commercial video of any re-recorded ABBA music. So we had to send the mix to ABBA’s music publishers and wait for their response… and we were told they usually reject around 95% of requests to shoot videos containing ABBA songs! So we were amazed and in awe when the publishers came back and gave their approval for us to go ahead and shoot a video! You could say we have the ultimate seal of approval for our version by ABBA themselves!

ЕМ: Your album definitely won’t be less successful than the single «Knowing me knowing you» is. Would you like your solo album will be platinum?

MGT: Platinum sounds good, heh heh. Hey if anyone buys my album, that’s a result for me!

MGT: I guess I don’t really feel complete without having one of my guitars in my hands…

ЕМ: What is your main life motto?

– What is the must-to-listen song?

МGT: That first one is obvious – «Knowing Me Knowing You» by MGT & Ville Valo.

– What is the must-to-see live performance?

MGT:  I would say Prince. He blew me away.

– What is the must-to-visit fest?

– What it the must-to-buy album?

EM: Finally, can you say a few words special for readers of our magazine?

MGT: Thanks for the tremendously positive response to my first single. Please check out my album when its released in June!

EM: Thank you, Mark! Good luck with release of your solo album! 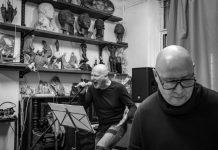 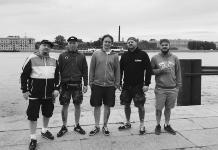